After years of trial and error, I finally came up with the perfect succulent potting mix recipe. This is the best soil for succulents, and it’s super easy to make too! In this post, I will share my recipe and show you exactly how to make your own succulent soil. 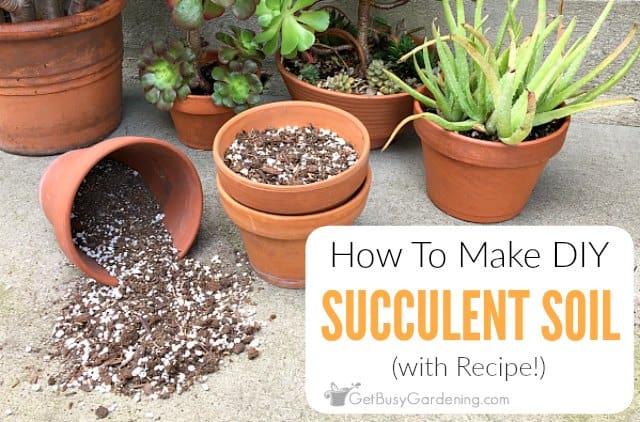 I don’t buy succulent soil, I make my own. It’s much cheaper than buying a commercial cactus and succulent potting mix.

Plus, I think the commercial soil mix for succulents and cacti (at least the stuff I’ve purchased in the past) are light on sand, and hold more water than I like.

Making your own succulent soil is not only cheaper than buying the commercial stuff, it’s super easy. 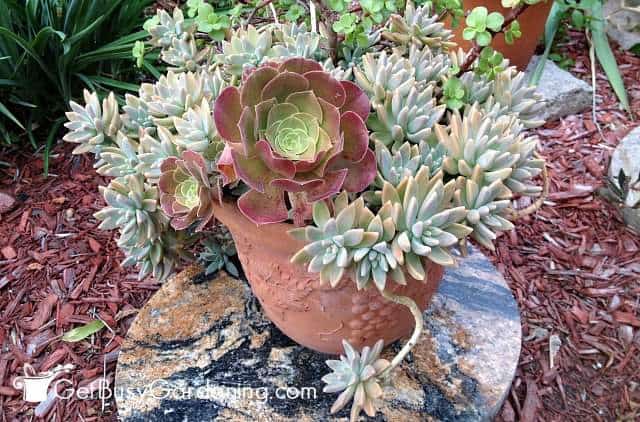 My DIY succulent soil is perfect for growing succulents in containers

The Best Soil For Succulents

Choosing the right potting soil for planting succulents in containers is crucial! When readers reach out to me about problems with succulents, most of the issues they have are caused by overwatering.

Overwatering is the number one cause of death for succulent plants, and that is why it is super important to make sure you use the right type of soil to plant succulents. 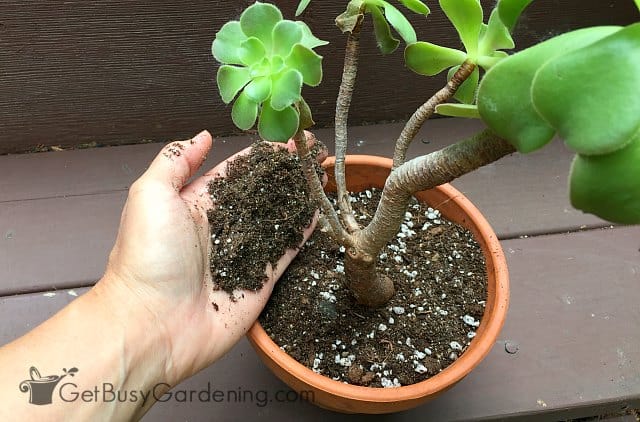 Benefits Of Making Your Own DIY Succulent Soil Mix

The main benefits of making your own DIY succulent soil mix are that it’s cheaper, and you control the ingredients.

Making your own bulk potting soil mix is cheaper than buying a pre-made commercial succulent soil. Plus, since you control the ingredients, you can modify this succulent soil recipe to get the perfect soil mix that your succulents will love.

How To Make Succulent Soil

Like I said, I find that many commercial succulent soil mixes aren’t coarse enough for my liking. So, over the years I’ve played around with making my own succulent mix, until I figured out an easy, inexpensive recipe that I love the best.

I wanted to make sure the ingredients were all easy to find in your local garden center, or online. Plus, I use these ingredients to make my other homemade potting soils too, so they are all very reusable.

To make your own succulent soil, you only need three ingredients, and you can find them at any garden center or home improvement store that has potting soil for sale: 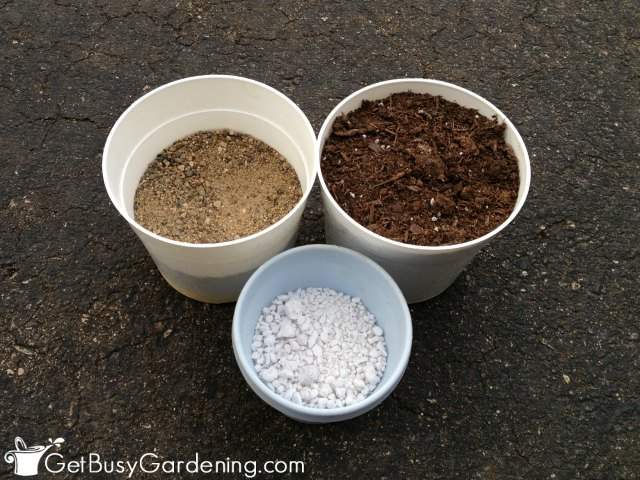 Any type of all purpose potting soil for indoor plants will work as the base to make your own succulent soil. Use whatever you have on hand (as long as it’s fresh, sterile potting soil).

The brands of potting soil I use varies depending on what’s on sale at the time I need to buy potting soil. When making potting mix for succulents, it’s best to use a light, porous soil as your base.

Don’t use heavy garden soils, and don’t use potting mixes that contain vermiculite, or any type of moisture control potting mix that says it retains water longer than other mixes. Succulents need a well draining potting soil, not one that holds moisture. 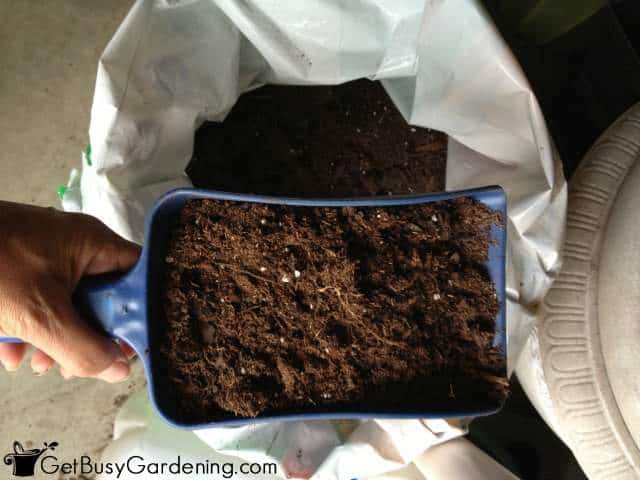 Use all purpose potting soil as base ingredient for succulent soil

Succulents grow best in a porous sandy potting soil, so amending your potting soil with sand is super important.

You could use any type of sand, but to ensure fast drainage for succulents, I recommend buying a coarse sand rather than the really fine stuff.

Just don’t use sand from the garden, the beach, or a sandbox (you never know what nasties will be in that sand).

If you prefer, you could use turface or poultry grit instead of sand. Either of those make excellent alternatives to sand in this recipe. 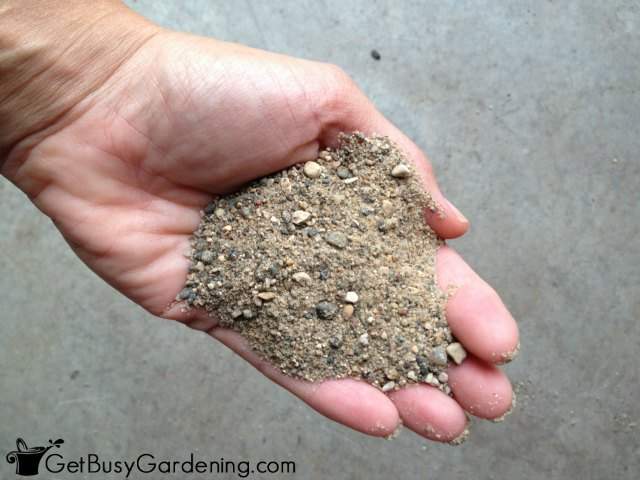 Perlite is a very lightweight organic soil amendment. It’s the white pieces that look like Styrofoam that you see in many commercial potting mixes.

Perlite retains very little moisture, prevents soil compaction, and helps add better drainage for succulents. In other words, it helps the soil drain faster which is exactly what we want for succulent potting soil.

You can usually buy perlite or pumice at any garden center or home improvement store in the same section as you would find potting soil for sale, but sometimes it’s hard to find in stores, so I usually buy it online. 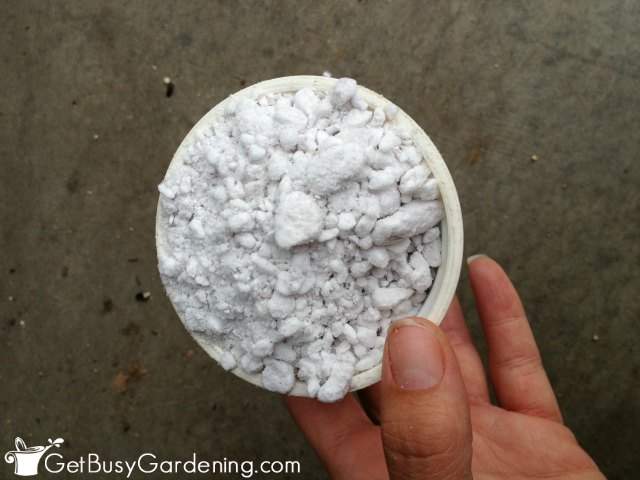 Supplies Needed:
Along with your succulent potting mix ingredients, you’ll need a few other supplies to help you measure and mix your ingredients. So grab these items before getting started… 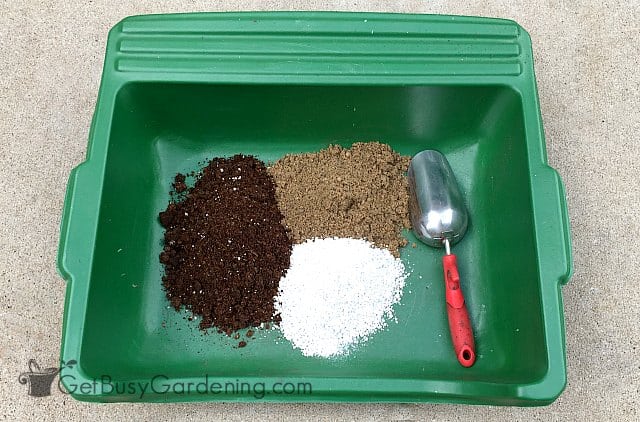 The succulent potting soil recipe* I use is:

* My recipe for DIY cactus soil mix is very similar, and it’s easy to modify this recipe to make potting soil for cactus plants instead. To make the perfect cactus potting soil mix, I add about 1/2 – 1 part more sand and perlite in my succulent potting soil for extra drainage.

What is a “part”? – A “part” is just a generic unit of measure to use for your potting soil mix ratio. You can use anything you want to measure your ingredients, as long as you use the same type of measure for each “part”.

If you use a scoop measure for 1 part, then use the same scoop twice for 2 parts, and three times for 3 parts. So, for example if you use a 1 cup measure, then this potting mix recipe would convert to 3 cups potting soil, 2 cups sand, and 1 cup perlite. 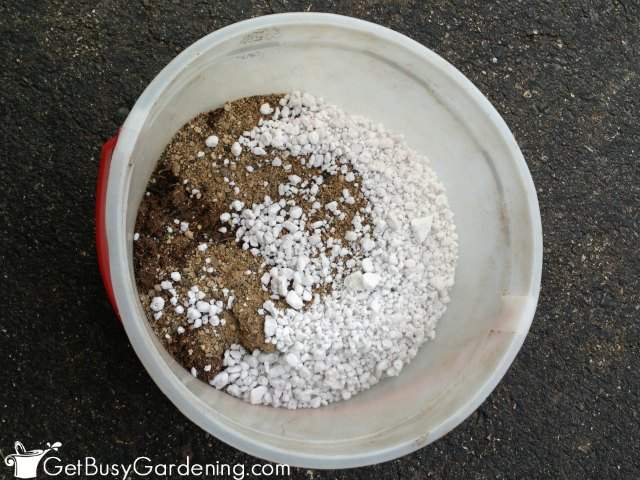 How To Mix Potting Soil For Succulent Plants

Mixing your DIY potting soil for succulents is super easy. All you need to do is dump everything into your mixing container (bucket, potting tray, wheelbarrow… whatever) and stir it all together.

Use a trowel, or your hands to mix it. Just make sure the ingredients are evenly mixed once you’re done.

That’s it. Told you it was easy to make your own potting soil for succulents.

Related Post: How To Make Potting Soil For Indoor Plants 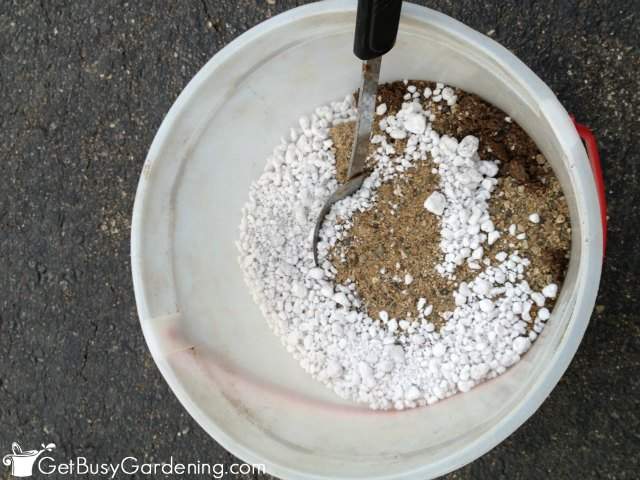 One of the things I love the most about making my own DIY succulent potting soil is that I can mix up a big batch, and store the leftovers for later. Succulent soil can be stored on a shelf in your basement, garage or garden shed.

You could mix a bunch of homemade potting soil ahead of time and store it for later use, or just mix it as you need it.

I like to mix up a big batch, and then I store it in a plastic bucket in the garage so I always have succulent soil on hand when I need it. 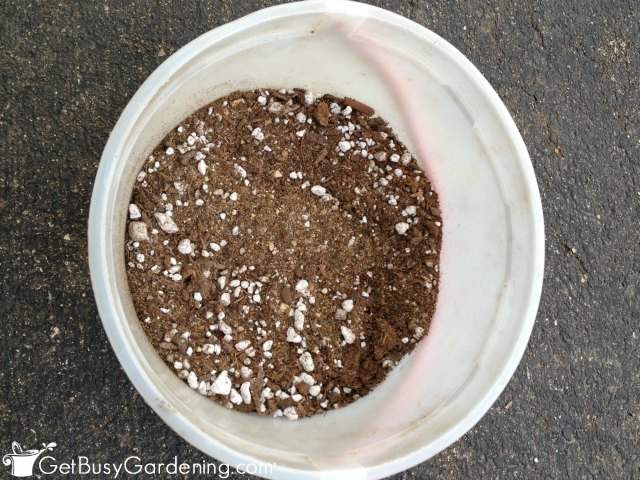 This DIY succulent potting soil can also be used for propagating succulent cuttings.

If you want more information about growing and caring for succulents, read my detailed succulent plant care guide. It has everything you need to know about growing succulents, including watering, light, fertilizing, pruning, pest control, propagation, and even a list of some of the easiest succulents to grow!

Do you make your own succulent soil? Share your succulent potting soil mix recipe in the comments section below. 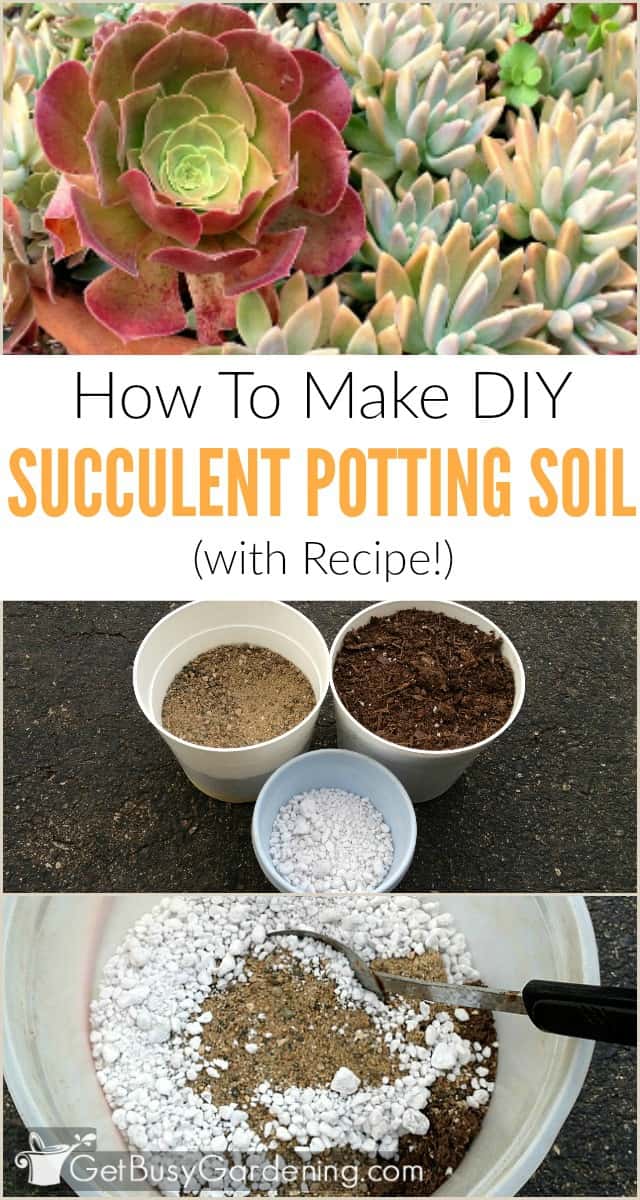 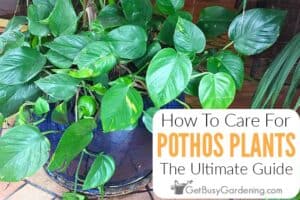 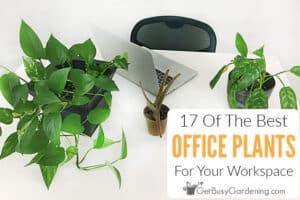 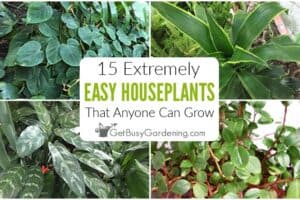 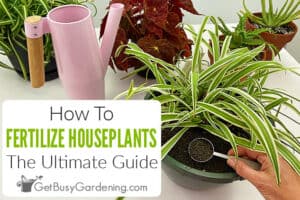