↑
Home / Food Gardening / Vegetable Gardening / Tomatoes Not Turning Red? Try These 5 Tricks…
We are a participant in the Amazon Services LLC Associates Program, an affiliate advertising program designed to provide a means for sites to earn advertising fees through links to Amazon.com. As an Amazon Associate I earn from qualifying purchases.

Why are my tomatoes not turning red? This is a very common question! In this post, I will talk about when tomatoes should turn red, and give you some reasons why they don’t. Then I’ll share my five tricks for ripening tomatoes on the vine faster.

Are your tomatoes slow to ripen on the vine? There’s nothing more frustrating about growing vegetables than being forced to frantically pick tons of green tomatoes the night before frost.

Then you bring them inside to ripen, where most of them end up rotting in a paper bag on your counter instead. Yuck!

If you live in a cold climate like I do, you start to get pretty nervous in late summer when your plants are full of large tomatoes that aren’t ripening. If you’re tired of being stuck with tons of green tomatoes in the fall, I’ve got you covered.

But first, let’s talk about when tomatoes should ripen, and the most common problems that cause them to stay green.

When Do Tomatoes Turn Red?

Tomato ripening time depends on a few things, like the variety of tomato you have, and your growing zone. But in general, they should begin turning red about 6-8 weeks after the flowers are pollinated.

As far as what month tomatoes ripen… again, that depends on a lot of factors.

But here in Minnesota (z4b), my early tomatoes start ripening on the vine sometime in late-June. But the bulk of them start turning red in mid-July.

Red tomatoes ripened on the plant

Why Won’t My Tomatoes Ripen On The Vine?

There are a few things that prevent tomatoes from ripening. Some varieties will mature faster than others, and the temperature is a huge factor too.

Tomatoes won’t turn red if it’s too hot (above 85F) or too cold (below 50F). Also, as tomato plants mature through the summer, they can become huge and overgrown.

When that happens, they tend to spend most of their energy on growing leaves and flowers, rather than ripening tomatoes.

Properly pruning tomatoes throughout the summer is important, and will result in more red tomatoes. So keep that in mind for the future.

But this won’t help you if you’re staring at a bunch of green tomatoes not turning red in late summer. Don’t worry, it’s not too late!

There are still a few tricks you can try to give them one last push to ripen before cold temperatures are here to stay.

Tomatoes ripening on the vine

5 Tricks For Ripening Tomatoes On The Vine Faster

We can’t force the plant to ripen tomatoes on the vine, but there are a few things we can do to help them out.

So, if fall is quickly approaching, and you’re stuck wondering how to turn green tomatoes red, then try these five tricks…

1. Cut off the new growth – The growing season is coming to an end, so your plant doesn’t need to waste anymore energy growing new leaves.

Topping the plant and cutting off all the new growth will give it more energy to ripen tomatoes faster.

2. Trim the flowers – Since it takes a couple of months for tomatoes to ripen after the flowers have been pollinated, it’s a pretty sure bet that new flowers aren’t going to amount to anything. So pick off all the flowers.

3. Pinch the suckers – Suckers are the smaller stems that grow between a branches and leaf joint. They get their name because they suck energy from the plant. So be sure to pinch off all of the suckers you see on your tomato plant.

4. Pluck off tiny tomatoes – I know it’s hard to remove any tomatoes from the plant, but these poor little babies won’t have time to mature before frost. Pull them off so your plant can focus on ripening the larger green tomatoes instead.

5. Prune some of the leaves – Don’t cut off all of the leaves, de-leafing tomatoes is never a good idea. But if your plant is huge and full of healthy green leaves, you can trim off much of that vigorous growth.

Getting my tomatoes to ripen on the vine

Sometimes tomatoes can be slow to ripen, but that doesn’t mean you can’t help to speed things up. If you’re tired of your tomatoes not ripening on the vine, then try these easy hacks to turn green tomatoes red in no time.

Share your tomato ripening tips in the comments section below. 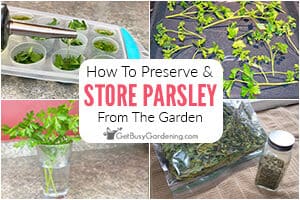 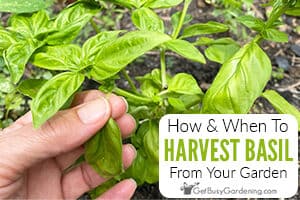 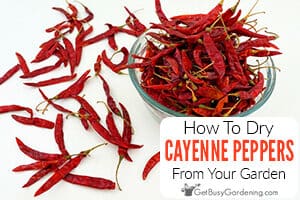 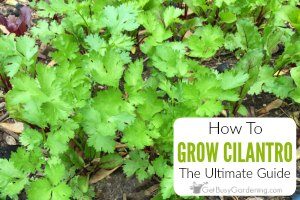