In some areas of the world, castor bean plants are invasive. But here in Minnesota, they make beautiful and unique tropical plants that die back every fall (funny how that works).

I love growing castor bean plants in my tropical garden, and I always get tons of compliments on them!

I especially love this red castor bean variety that I have been growing in my tropical garden for a few years now.

I first received my red castor bean seeds in a trade, and have been collecting the seeds from my garden every year since. It’s very easy to collect castor plant seeds and save them for planting next year.

Castor bean flowers are insignificant, but they form gorgeous seed pods that look like flower puffs at first.

Red castor bean seed pods start out as bright red puff balls, which really add to the beauty of this plant.

The seeds will form inside of these red puff balls, so be sure to leave them on the plant if you want to collect castor bean seeds.

When To Harvest Castor Bean Seeds

The seed pods will start to fade and eventually turn brown. Allow castor bean pods to dry on the plant so that the seeds have plenty of time to mature.

Eventually, the seed pods will split open, which is a sure sign that it’s time to start collecting castor seeds.

Don’t worry about collecting castor bean seeds before frost, I usually don’t get around to it until after a hard freeze, and I haven’t had problems with seed viability.

Castor bean seeds are oval shaped and have a nub on one end of the seed. They are pretty large, and hard to miss – larger and rounder than edible bean seeds.

How To Collect Castor Bean Seeds

You can store the seeds right in the pod, or remove the seeds from the pods before storing them.

To collect castor plant seeds, break open the seed pods. There are three castor seeds per seed pod. Sometimes not all the seeds in the pod are large enough to keep.

Discard any castor bean pods or seeds that are small, they won’t be mature enough to germinate.

How To Store Castor Bean Seeds

Allow your castor seeds to dry completely before storing the seeds. Ideally, the seeds should be stored in a dark, dry place until spring.

Once they’re dry, you can store your seeds in a paper bag or small plastic containers (like these film canisters).

If you wan to share them with friends, then these small envelopes are perfect, or you can get customized seed envelopes, or make your own DIY seed envelopes.

I store my seed collection in a plastic shoe box, but if you like to organize yours, then a Seed Keeper would be perfect!

It’s important to note that all parts of the castor bean plant are poisonous, so be sure to keep castor bean seeds and seed pods out of reach of children and pets at all times.

How Long Does It Take To Harvest Castor Beans?

You may need to wait as long as 170 days for your castor plants to become fully mature before you can harvest the seeds.

They need a long, hot growing season. So if you live in a cold climate like I do, make sure you give them plenty of sun.

Where To Find Castor Bean Seeds For Sale

It may be difficult to find castor beans for sale, depending on where you live. But most garden centers should sell the seeds from mid-winter through spring.

Collecting castor bean seeds from the garden is fun and easy! It’s a great way to grow your favorite plant year after year, and share the seeds with friends (just be sure to let them know that both the seeds and plants are poisonous).

Now that you know how to collect castor bean seeds, learn how to grow castor seeds next!

If you’re new to gardening and want to learn how to grow seeds indoors, then my Starting Seeds Indoors eBook is just what you need. It’s a quick-start guide for beginners to get started learning how to grow their own seeds. Download your copy today!

Share your tips for how to collect castor bean seeds in the comments section below. 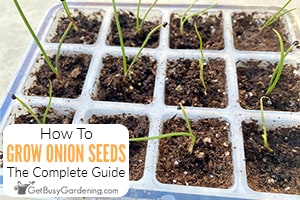 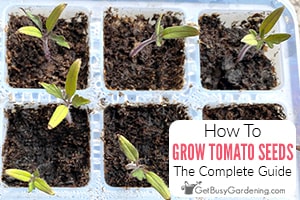 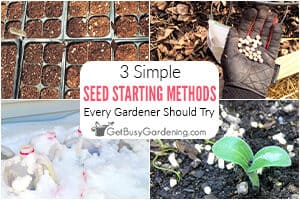 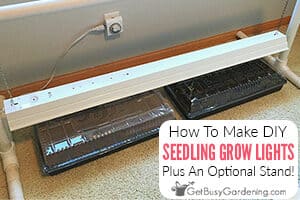